2D 7Li,15N heteronuclear shift correlation has been applied to several lithiumorganyls consisting of polydentate N ligands such as TMEDA, PMDTA and (-)-sparteine. In combination with other spectroscopic techniques, details on the formation of the lithiumorganyl polyamine adducts, as well as the strength of ion pairing in solution has been explored (collaboration with the Fernández group, Almeria; click here). 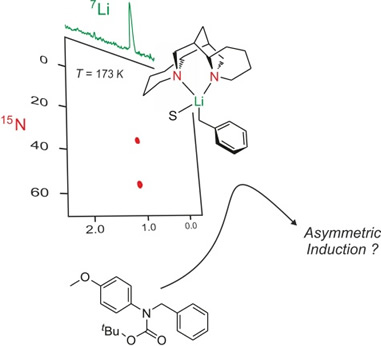 Group 14-element-bridged [1]-, [2]-, and [3]chromoarenophanes were studied by EPR and UV/Vis spectroscopy, as well as electrochemical and computational methods. The unpaired electron mainly occupies a dz2 orbital on Cr, irrespective of the size of the ansa bridge. Unselective insertion of a platinum(0) fragment into a C-Sn bond was found in a stanna[1]chromoarenophane, thereby giving rise to a heterobimetallic complex. This paper was produced in collaboration with the Braunschweig group (Würzburg) and selected as Very Important Paper (VIP).

Several rare earth coordination compounds and the first actinide coordination compound of a multifunctional ligand have been synthesized and characterized in detail in the solid state and in solution by various methods. Pulsed field-gradient spin-echo (PGSE) diffusion measurements and 1H,19F heteronuclear Overhauser spectroscopy (HOESY) revealed that, in particular, the Pu(III) complex shows a strong tendency to form solvent-separated ion pairs in acetonitrile solution. The results were recently published in Chemical Science (click here). 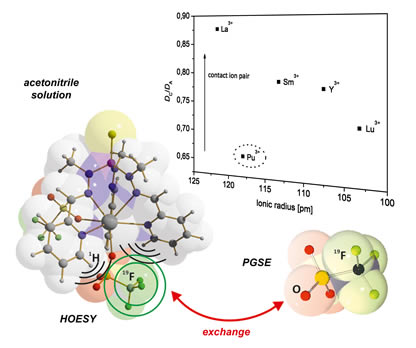 Heterobimetallic Cuprates: Several bimetallic silyl halido cuprates of the general formula [CuX{Si(3,5-Me2pz)3Mo(CO)3}]- are reported in a recent Full Paper in Chemistry. (click here) The electronic and structural properties of the complexes were probed in detail by X-ray diffraction analysis, IR-induced multiphoton dissociation studies, cyclic voltammetry, gasphase photoelectron spectroscopy, UV/Vis and fluorescence spectroscopy. The frontispiece in issue 26 shows a van der Waals plot of the silyl chloro cuprate in the background and the different characterization techniques applied in the foreground. 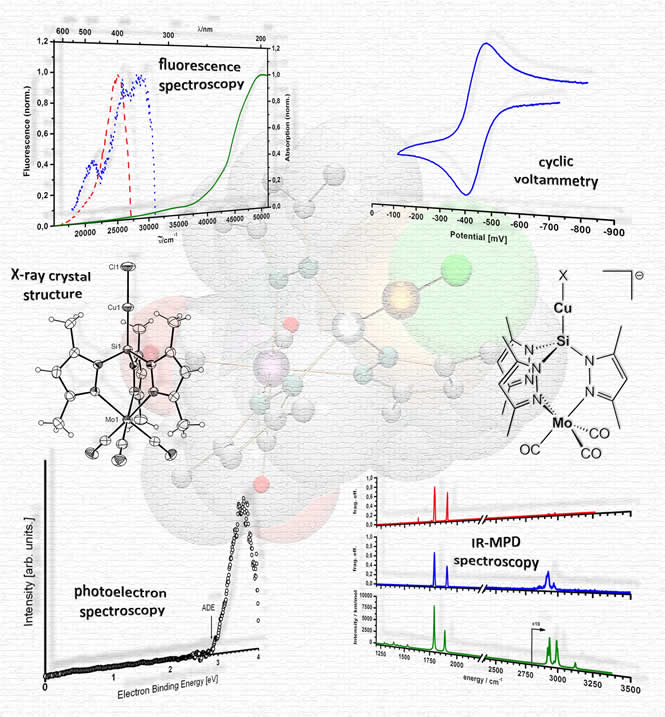 The preparation and structures of organochalcogenyl-substituted bicyclo[1.1.1]pentanes of Group 14 have been reported, together with detailed NMR spectroscopic studies in solution. (click here). 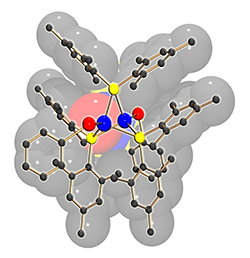 In a recent collaborative study we reported on the development of a metal ion-mediated base pair for electron transfer in DNA (Chem. Eur. J.; click here). A new C-nucleoside that is structurally based on the hydroxyquinoline ligand, which is able to form stable pairs in DNA both in the absence and in the presence of metal ions, was synthesized in the group of H.-A. Wagenknecht (KIT). Subsequently, our group has probed the interactions between the metal centers in adjacent CuII-mediated base pairs in DNA by electron paramagnetic resonance (EPR) spectroscopy. The metal-metal distance falls into the range of previously reported values. 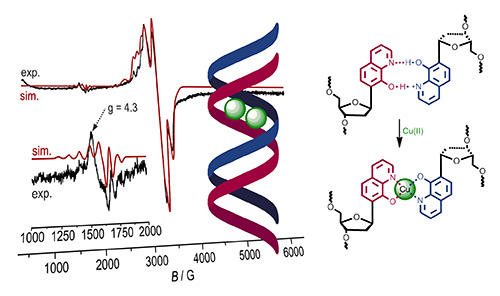 The preparation and structure of the first metallacyclic alkyl-amido carbene complex is reported, including NMR spectroscopic, computational and cyclic voltammetry studies of the bimetallic RuII-IrIII complex.The results were recently published in Dalton Trans. (special issue). 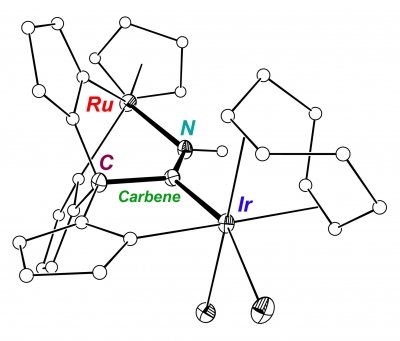 In a recent collaborative paper on metallopolymers (with the groups of Peter Roesky and Christopher Barner-Kowollik) we reported on polystyrene-based copolymers with palladium-ligating side groups, which were obtained by RAFT polymerisation of chloromethyl styrene and styrene, subsequent azide transformation and quantitative copper-mediated 1,3-dipolar cycloaddition of ethynyl pyridine. 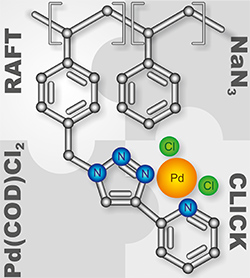 In a collaborative paper with the group of Jan Paradies we reported on the heterolytic splitting of hydrogen by two types of [2.2]paracyclophane derived bisphosphines in combination with tris(pentafluorophenyl)borane. The reactivity of the frustrated Lewis pairs (FLPs) was exploited in the first diastereoselective domino hydrosilylation/hydrogenation reaction catalyzed by FLPs.

Finally, the 4th German edition of the renowned Inorganic Chemistry textbook “Huheey” appeared recently, with several contributions from a team of authors, also from our side. 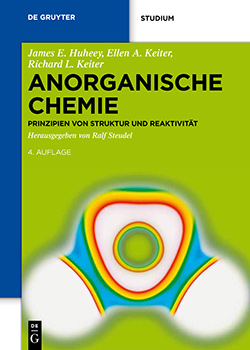 In a recent ChemComm we report on the preparation and structures of the first alkynyl-functionalised and catenated Sn2Si3 bicyclo[1.1.1]pentanes, together with NMR spectroscopic and computational studies of their properties. This article is part of the ChemComm ‘Frontiers in Molecular Main Group Chemistry’ web themed issue. 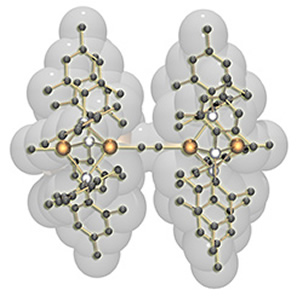 Scholarship holders of the Fonds der Chemischen Industrie recently met in Karlsruhe at the Institute of Inorganic Chemistry for a local meeting. We had a wonderful scientific workshop and all participants gratefully acknowledge the support by the FCI.

2D 1H,89Y heteronuclear shift correlation through scalar coupling has been applied to chemical shift determination on a set of yttrium complexes of various nuclearities. This method allows the determination of89Y NMR data in short time.

In a recent collaborative paper with the group of Peter Roesky we investigated in detail the redox chemistry of N-2,6-diisopropylphenylimino-2-pyridine, including cyclic voltammetry. Bulk samples of alkali metal salts of monoanionic radical and dianionic iminopyridine were synthesized and characterized by various methods. The radical form was fully investigated by magnetic measurements, EPR spectroscopy, and DFT calculations (See also spotlight on this paper).

A structural, EPR spectroscopic and electrochemical study on some copper complexes of tripodal N-donor ligands has been published recently. The paper was dedicated to Prof. Dr. W. Kaim on occasion of his 60th birthday.

In a recent tutorial review we have summarized early findings and recent developments in the area of heavy [1.1.1]propellanes of group 14. More than 20 years after the first member of this family has been published, several contributions to this area have impressively extended the spectrum of these “non-classical” molecules. Still in its infancy, further perspectives are now arising.

Group 14-element-bridged [1]-, [2]-, and [3]chromoarenophanes were studied by EPR and UV/Vis spectroscopy, as well as electrochemical and computational methods. The unpaired electron mainly occupies a dz2 orbital on Cr, irrespective of the size of the ansa bridge. Unselective insertion of a platinum(0) fragment into a C-Sn bond was found in a stanna[1]chromoarenophane, thereby giving rise to a heterobimetallic complex. This paper was produced in collaboration with the Braunschweig group (Würzburg) and selected as Very Important Paper (VIP).

2D 7Li,15N heteronuclear shift correlation has been applied to several lithiumorganyls consisting of polydentate N ligands such as TMEDA, PMDTA and (-)-sparteine. In combination with other spectroscopic techniques, details on the formation of the lithiumorganyl polyamine adducts, as well as the strength of ion pairing in solution has been explored (collaboration with the Fernández group, Almeria).

New KIT Phone numbers from January 01, 2011: Please note that our phone numbers have been extended from four to five digits.

The preparation and structures of new heteronuclear [1.1.1]propellanes E2Si3Mes6 have been reported (Mes = 2,4,6–Me3C6H2), together with their electronic properties, photochemically controllable radical-type reactivities, and reaction products thereof. 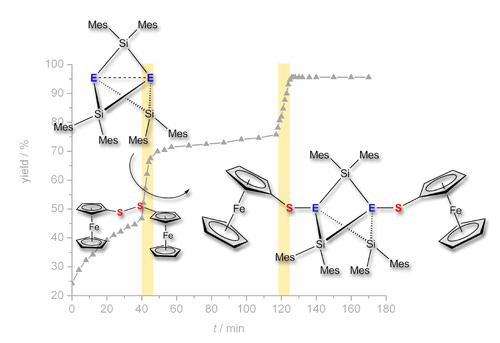 In recent collaborative papers with the groups of Dietmar Stalke and David Scheschkewitz we reported on experimental charge density distribution in [Mg{(pz*)3C}2], (pz* = 3,5-dimethylpyrazolyl), containing two non-coordinating sp3 carbanionic lone-pairs (Figure a) and the transfer of a disilenyl moiety to aromatic substrates and lateral functional group transformation in aryl disilenes (Figure b), respectively.

The icing on the cake: We have recently reported on the successful synthesis of the first pentasilapropellane, Si5Mes6 (Mes = 2,4,6-trimethylphenyl), which consists of an archetypal [1.1.1] cluster core featuring two ligand free, “inverted tetrahedral” bridgehead silicon atoms. The separation between the latter is much longer, and the bond strength is much weaker, than usually observed for a regular Si-Si single bond. A detailed analysis of the electronic characteristics of Si5Mes6 revealed a low-lying excited triplet state, indicative for some biradical(oid) character. Reactivity studies provided evidence for both closed-shell and radical type reactivity, confirming the unusual nature of the stretched silicon silicon bond in this “non-classical” molecule (this contribution has been highlighted recently).

In a recent collaborative paper with the group of Holger Braunschweig we reported on the reduction chemistry of ferrocenylborol: One electron reduction of 1-ferrocenyl-2,3,4,5-tetraphenylborole results in a radical anion with 5 electrons in the borole ring. Both EPR spectroscopic investigations and spin density calculations confirm the formation of a borol radical (see picture). Further one-electron reduction stimulates an intramolecular [(C5H5)Fe] migration from the cyclopentadienyl anion to the borole dianion.

Radical-Type Reactivity of Metalla[1.1.1]propellanes of Group 14: The preparation and structures of new metal-terminated bicyclo[1.1.1]pentastannanes are reported, together with preparative and electrochemical studies on their reduction chemistry.

We have recently reported on the utility of multifunctional, k1Si:k3S-coordinated tris(methimazolyl)silanide ligands [Si(mtMe)3]– for the stabilisation of a triangulo palladium cluster [Pd3{Si(mtMe)3}2] (see picture) consisting of very unusual m3-capping SiR3 donors. Differences to the corresponding platinum chemistry were supported by NMR spectroscopy and DFT calculations. This article is part of the ‘Emerging Investigators’ themed issue for Chem. Commun.

The preparation and structures of new tris(pyrazolyl)methane and tris(pyrazolyl)methanide complexes have been reported, together with mechanistic and synthetic studies of their interconversions and solution dynamic behavior. This work was performed in collaboration with the Mountford group (Oxford).

In a recent full-paper (Dalton Trans. 2009, 5612 – 5626; “Hot Article”) we reported on synthetically valuable precursor compounds as well as the synthesis and some reactivity studies of a novel ambidentate tris(pyrazolyl)silanide (MeTpsd). This silicon-containing Janus-head ligand can either separately or simultaneously act as κ1Si– or κ3N-coordinating ligand (see inside front cover of issue 29). 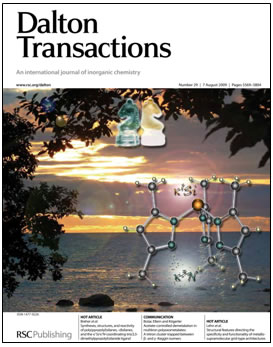 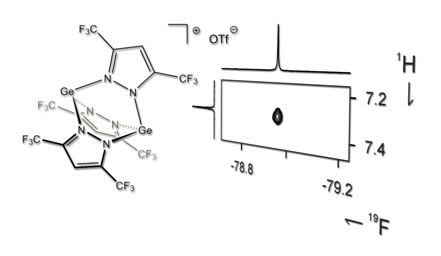 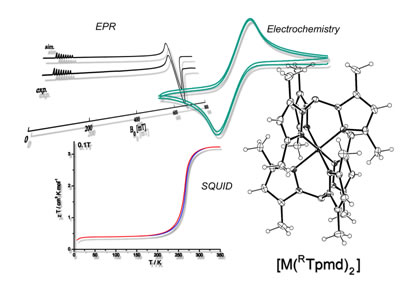 b) A straight forward synthetic access towards novel ruthenium(II) mixed-sandwich complexes comprising tris(pyrazolyl)methane and cyclopentadienyl ligands has been described recently. Detailed NMR investigations, molecular structures and the electrochemical properties of these complexes have been presented as illustrated. 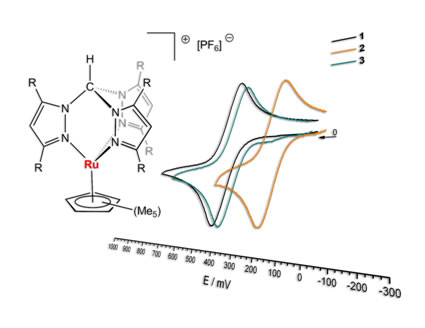 In a recent collaborative work with the group of Ignacio Fernández a straightforward natural abundance 2D HMQC NMR experiment between lithium-7 and nitrogen-15 has been reported. This fast, reliable and routinely implementable method represents a powerful spectroscopic tool to study complex structures or intermediate species in solution, in particular those containing nitrogen-lithium bonds. 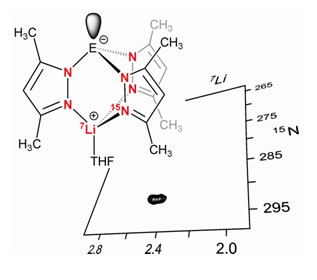 Detailed studies on the synthesis, structure, redox chemistry and bonding properties of pentagerma[1.1.1]propellane (1) have been published and spotlighted recently (see section “Publications”). Fundamental aspects of the interactions between the bridgehead germanium atoms in 1 were examined using density functional theory and CASSCF calculations. The latter have been performed in close collaboration with Prof. Wim Klopper (Uni KA). 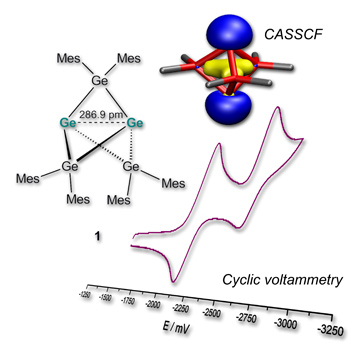 In a recent Dalton Perspective we reviewed the area of multidentate ligands ranging from scorpionates to Janus-head types, concentrating, in particular, on C3-symmetric tripodal ligands (see Dalton Trans.2008, 5836 – 5865). 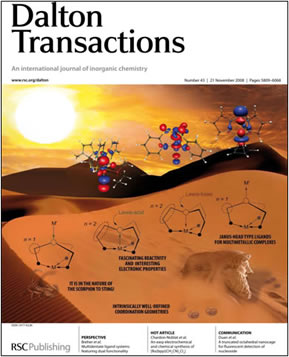 Multifunctional ligands with podand topology provide intrinsically well-defined coordination geometries. Several subgroups of multidentate ligand systems comprising dual functionality have been developed so far. Recent advances made in this research area nicely reflect its topicality. Work on metal complexes of ambiphilic ligands consisting of Lewis-acidic Group 13 element bridgehead atoms and additional donor functionalities is in the current focus of interest. The intrinsic topology of tetradentate ligands may introduce a fascinating reactivity and interesting electronic properties of the metal complexes. Janus-head type ligands are very promising candidates for the preparation of multimetallic complexes.